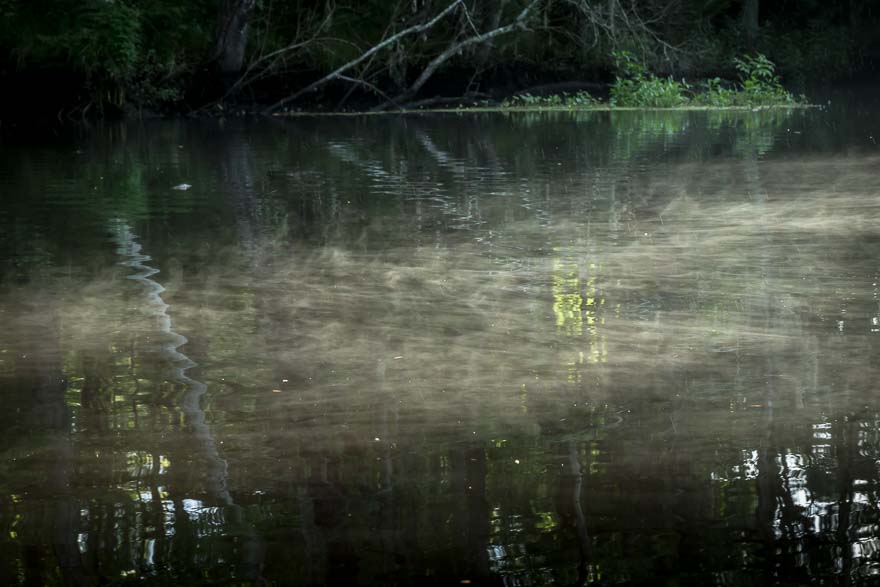 Officially Summer doesn’t start until June 21, but everything here in Florida says it’s summer in a big way. Warm, sunny days, bugs, and humidity all say summer is here. Saturday morning started out sunny, with a few low clouds to the east, but these were quickly overtaken as the sun rose. The tide was low although the tide tables for Lofton Creek listed high tide at 9:00 am, just two hours away. Something was off. I parked at a small launch area off Pages Dairy Road (200A) just before it crosses the creek. There is a parking area and good access. I started my paddle east to check out the sun streaming onto the water, and hung around a while, waiting for the water to rise a bit. I knew that there was not going to be any cloud cover, so this would be a “recon” day. There was still some mist rising out of the water and soon all of these magical still moments of the early morning would be gone.

As I started heading back to the west, upstream, the clouds began to roll in. I became very excited and quickly got the camera back out. The light level was low but very nice. But then the sky continued to darken and I had a sneaking suspicion that some rain was on the way. At that point I was about 30 minutes from the car, and decided to just keep going out. Chances were that whatever the event, it would soon be over and the sun would return. As the sprinkles turned into an honest rain, I headed under the canopy of a large oak which offered some protection. Being in a rain shower is refreshing. The smells, the gentle rustling sound of water hitting the trees and the creek surface, and the frogs celebrating, all contributed to my hopes that this would be a pleasant experience. After about 10 minutes, it started to rain harder and I secured my camera and made a decision to stay. The water ran off the leaves into rivulets, pouring onto every part of me. I could feel my underwear getting soaked and I knew that this was going to be a wet one. For about 3 minutes the rain seemed to let up and became a soft drizzle. OK, now that I am completely soaked, let’s keep going out and maybe it will clear up enough to get the camera back out. A few more minutes passed and the rain returned. You can hear the sound of the rain getting louder, and then it comes. I found another tree to go under but this was not helping at all. Final decision, let’s make our way in the direction of the car and hope that it doesn’t thunder. 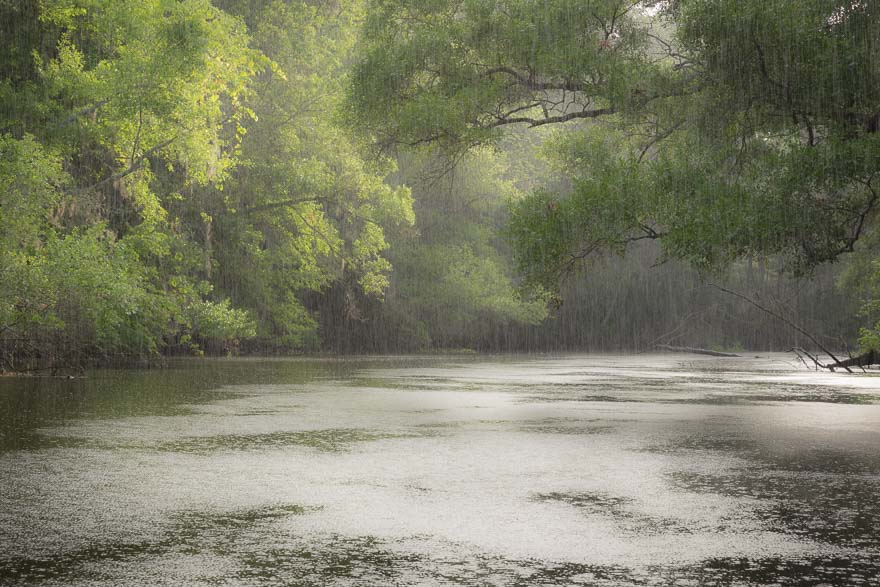 Stream from Above – Lofton Creek

Paddling in the pouring rain is not fun. I felt kinda stupid and asked myself the meaningful question, “What are you doing here?” The car was a welcomed sight and as I pulled up to the launch site the tide had raised the water level significantly so it was easy to get out. There was an older man in an old pickup truck parked on the side waiting for the rain to stop so that he could start fishing. He got out of his truck and we started talking about the rain. “Ya’ think it’s gonna’ stop?” “Nope.” I waited for about 10 minutes and really hoped that the rain would stop but it persisted. I knew that once I dragged the boat out of the water and pushed it up on the roof rack that it wasn’t coming down again for the day. Of course I was totally unprepared – no rain gear, no change of clothes, no towel. I used my small rag in my camera bag to wipe my face. Luckily I had a plastic garbage bag to sit on. I turned on the a/c and raised the temp just to try to dry off. This was the first time I was caught in the rain, I guess most of the time I have enough sense to keep out of it, but the weather reports were hopelessly lame in predicting any kind of precipitation. I decided to return tomorrow.

Sunday morning and I’m back. The tide was even lower than yesterday and I feared two of my biggest detriments – fallen limbs preventing passage and SUN! Well, today I had both. While yesterday there were clouds in the sky today it was completely clear. Summer in Florida! Enough complaining, I’m happy to be out here, I have my rain coat, and I’m ready to see how far upstream I can make it. After about 20 minutes I realized in horror that I had forgotten my coffee thermos. Should I turn around to retrieve it? Are you kidding? I decided to suffer just to teach myself a lesson. “Boy, a coffee would be really delicious right about now…and now.” I fantasized about that missing coffee for the next hour. 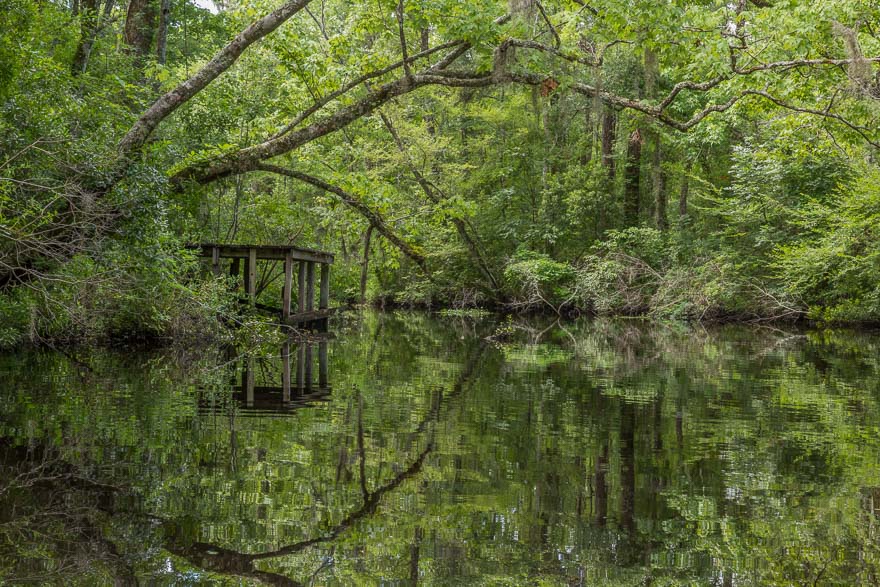 I could see from my vantage point on the water that there were a few very small clouds coming in. I am always optimistic that the big cloud would come park itself to block the sun. Those clouds just like to tease me. I’ve learned from years of landscape photography that an image with illumination from the direct sun is just too contrasty for me. But that doesn’t keep me from trying. The yellow flies started coming out around 9 am and you can hear them buzzing about near the shore. Once they hone in on you it is a constant hassle. They have a way of buzzing around your head, barely landing and then taking back off. Pure annoyance. You are there waving your arms like a madman, swatting at thin air. OFF! does not work at all. I carry a can of Raid flying insect spray and even that doesn’t seem to get them. Hopefully the ones I did spray flew away to expire. I got nailed 3 times on the arms. The worst sensation is feeling the bite and looking down to find one of the beasts on your skin. Arrrgh!

Lofton splits into McQueen Creek and I took the Lofton side. The tide was still very low and the McQueen side was filled with branches. I managed to paddle for about 20 minutes until there was no way to get through. At the turnaround I stopped and had a snack (without coffee!) and just sat there. Looking up and about I felt like i was in a wild place, a place that was timeless and untamed. I felt so alone. These are the experiences that are special in these places. As you listen and look, there is life everywhere. The view is unlike anything you see in a normal day, this is raw and honest and the way things develop on their own. There is order and there is chaos. There is a natural system that drives it all. The creek continues to flow, the level go up, then they go down. Everyday, regardless. It is something to think about.

On my paddle back the tide was coming in. The water level changes about 18 inches between high and low tides. The current isn’t strong but it is there. About a half mile from the launch site there is a huge old growth cypress. There are two other very large cypress close to it. I remembered this tree from my last time here in the winter. It is enormous. Someone carved their initials in the trunk and that upset me. Some people are real idiots. I like to think about the old Florida when the land was covered with these giant trees. These creeks were probably like an Amazon rain forest. Although most of the trees are gone, at least there are some of these outliers still intact, inviting us to visualize the past. I was happy to make the connection.

As I pulled into the takeout point there was a local fishing. We talked about Hurrican Dora in 1964 and how the water levels were 8 ft higher, everything including the roadway, was flooded. Two other kayakers pulled up ready to go fishing. We we asking about alligators in the creek. Apparently there are some smaller gators in there. One of the kayakers said proudly that he wasn’t worried, as he pulled up his T shirt to reveal a handgun stuffed in his shorts. I fell sorry for whatever gator meets up with this guy. Overall, a good day, even with the terrible light and low tide.