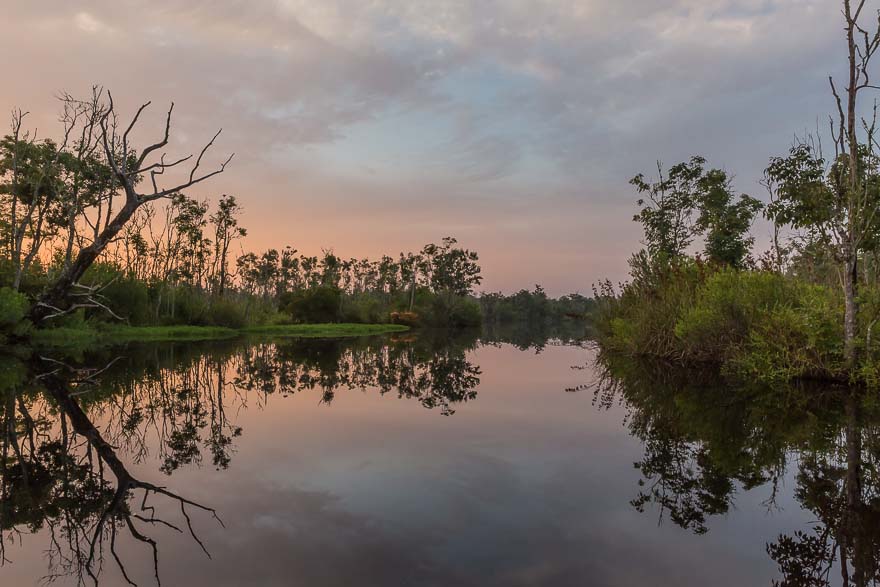 I arrived at Ringhaver Park at 6:20 hoping to get a good start on the morning. A previous scouting mission revealed an alternate entrance to the canoe launch path at the end of Morris Road. I unloaded and attached the wheels and started hauling the boat. The path is paved but it is about a 20 minute walk. I arrived at the launch point sweaty and tired, but the sun was rising and I could see the orange glow against the purple sky. A few clouds too, much to my satisfaction.

There’s nothing like a “fresh” creek, still and silent, ready to receive my boat and the start of the day. As I paddled out of the small cove into the main creek I could see that McGirts (or is this still the Ortega River?) is a formidable body of water. I had to stop to take it in, me being the only person as far as I could see. The sun continued to rise as I started my journey upstream going south. 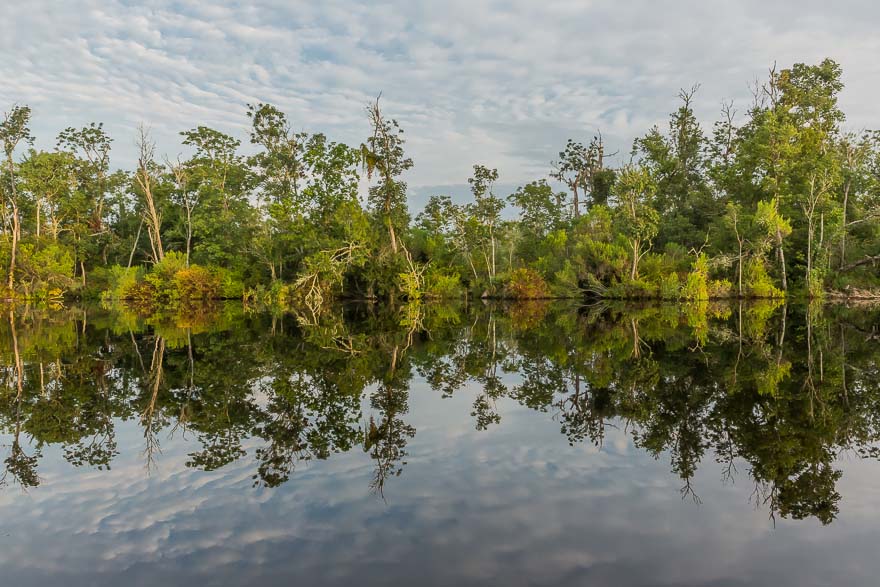 Along the West Bank – McGirts Creek 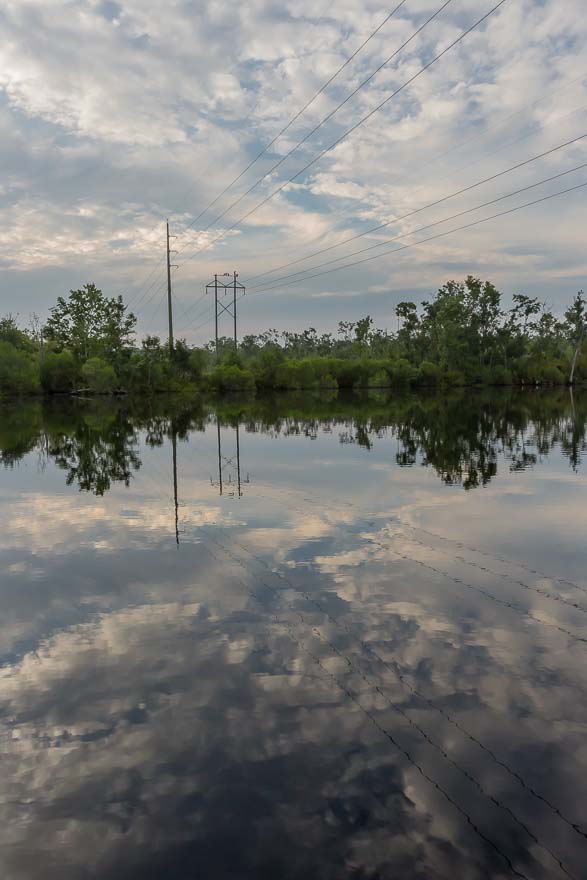 I passed under some power lines and stopped to photograph. From the Google map I knew that the creek didn’t narrow down until Collins road, which was a good 2.5 miles. The current was light, and I started a good rhythm, stopping intermittently to grab a shot. Soon I passed what turned out to be the only house/building on the creek. It was an obnoxious compound, with a large dock, screened swimming pool and porches, and lots of glass doors looking out on the water. A large lawn, fences, and several No Trespassing signs completed the site. Two large black dogs started barking as I paddled by, a most un-welcomed sign. Maybe some nice people live here, but certainly they are completely unsympathetic to the creek. I wonder why they were the only visible water front property I saw, perhaps they got some special permit to build a monument to humanity. I’m glad the rest of the creek wasn’t spoiled by development.

The creek started to narrow and around 9:00 I could hear the sound of traffic. Around one more corner and I could see the Collins Road overpass. I love going through these “tunnels” except for the occasional large spiders that seem to love it under there. I could definitely feel the current now and was working to keep the boat going south. Between Collins Road and I-295 is a nice stretch with lots of overhanging trees. My problem was that the current was keeping the boat in constant motion and I really needed an anchor point to frame a shot. The occasional downed tree limb offers the best place to steady yourself for the moment it takes. The creek was too deep for the anchor pole.

Overpassing Nature – McGirts Creek at the intersection of I-295

Most of the I-295 construction is complete and I stopped to admire the massiveness of the highway above. The exit ramp itself is three lanes, in addition to 3 lanes of the interstate in each direction. It was close to high tide and I was able to easily touch the bottom of the structure, another foot and I would be crouching down. I stopped for a while in the coolness taking some interesting shots and listening to the rumble of the traffic. I thought that most people passing over had no idea they were going over such a beautiful creek and if they did notice anything they probably thought this was a drainage ditch. 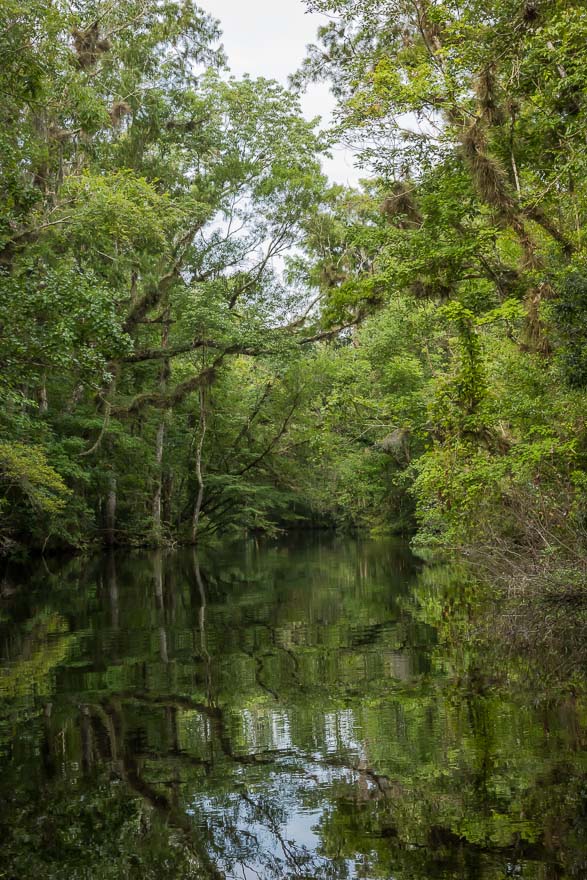 From this point the creek narrowed more and became twisty, my kind of landscape. Each creek seems to have its own “signature” and McGirts seemed to be more primeval than most. The gnarled trees covered with air plants added to the ambiance. I reached the Blanding Blvd. overpass and again these glimpses of civilization stood in stark contrast to the wildness of the creek. The intersection of Blanding and I-295 is probably one of the busiest roadways in the city. I’m amazed that the planners saved the flora and didn’t just cut it all down.

Just past Blanding a large tree had fallen and blocked the path. I was disappointed. I’m sure the next section was special and one day perhaps I will return. I started back this time with the current. Nice to be gliding along with an occasional paddle to steer. Interesting how the light from another direction can change a scene. I prefer a back-side light when doing these types of landscapes. Makes the layers of foliage separate. Near I-295 there was a small side stream that I explored. As I retraced my steps everything seemed familiar and I made good time passing under Collins Road and then continuing upstream to the lone residence. The was a large tree with yellow leaves that caught my eye. Around 11:00 I heard the sound of a speedboat and a jet ski roared by. They were followed shortly thereafter by 2 other boats, happy to be going full throttle on the creek. I don’t think they realize that their wake can really mess with a kayak. I grumbled to have to share the creek and knew that my time was up. Having 4 hours all to myself was a treat.

I passed under the power lines and knew the canoe launch was close. No one was there as I approached. I pulled the boat out of the water, attached the wheels, and mentally prepared myself for the long portage. It was not fun, but the nature trail is shady and filled with some great trees. I was soon at the car and was a happy camper when all was secure and the a/c was on.